Scientists have found long-sought proof that people release potent chemical signals that can have profound effects on other people.

The research settles a 40-year debate about whether humans produce and can respond to "pheromones," molecules that are usually airborne and odorless and which, in other species, influence such physiological processes and behaviors as mate choice, the recognition of one's own family members, and the ability to "smell" the difference between friend and foe.

Specifically, the new research shows that women's underarm odors can alter the timing of other women's reproductive cycles. It explains why women who live together often develop synchronous menstrual periods, and could spur development of "natural" fertility drugs or contraceptives.

The finding may also lead to the discovery of compounds in sweat that could be incorporated into fragrances to alter body chemistry or mood.

"This is definitely going to make people sit up and take notice," said Charles J. Wysocki of the Monell Chemical Senses Center in Philadelphia. Previous studies by scientists at Monell and elsewhere showed similar results but later were recognized as flawed. The new work, Wysocki said, seems to answer the question for good.

"The evidence has now become quite strong that humans produce and detect pheromones," agreed Edward W. Johnson of Idaho State University in Pocatello.

The discovery was especially gratifying to Martha K. McClintock, the University of Chicago researcher who, with colleague Kathleen Stern, describes the work in today's issue of the journal Nature. As an undergraduate almost 30 years ago, McClintock observed that many women in her dormitory menstruated in synchrony.

For decades McClintock immersed herself in the task of identifying the timing mechanism. She and others suspected pheromones, but proof was hard to come by.

Pheromones have been documented in many species, ranging from insects to elephants, as sex attractants, kinship identifiers or alarm signals. In many species they are detected by a specialized organ inside the nose or mouth called the vomeronasal organ, or VNO.

There was ample evidence that human pheromones exist; babies show a clear preference for pieces of clothing that have been worn by their own mothers, for example, and research suggests that men and women choose their mates in part by sniffing out partners with compatible immune systems. Several years ago, researchers in Utah even said they had identified the first human pheromones -- and turned their discovery into a line of perfumes that today boasts revenue of $40 million a year.

But the Utah work has been criticized by many experts. And the Monell work, on menstrual cycles, did not take into consideration the fact that many out-of-phase cycles will naturally converge over time.

Moreover, scientists have remained uncertain whether the human VNO, a pair of tiny pits in the nose, is a functional organ or an evolutionary vestige.

To find out if human pheromones exist and can affect menstrual timing, McClintock and Stern asked nine women to wear gauze pads under their armpits all day. (Sweat is a common source of pheromones in mammals.) The pads, changed daily, were cut into pieces and frozen, and a daily tally was kept of each woman's menstrual phase.

Then, every day for four months, the researchers rubbed thawed gauze pads above the upper lips of 20 volunteer women who had agreed to have any of 30 different "natural essences" rubbed under their noses. "Sweat" was among the 30. "We buried it in the list," McClintock said.

Computer models indicated there must be two substances in the sweat -- one that lengthens cycles and one that shortens them -- and that together they can quickly lead to groups of women having synchronous periods.

"This carefully controlled study clearly shows, for the first time, that the potential for chemical communication involving sexual function has been preserved in humans during evolution," wrote Aron Weller, of Israel's Bar-Ilan University, in a commentary in Nature.

McClintock emphasized the word "potential," since the experiment does not prove these signals work under normal conditions, such as across a room.

"We put it on the upper lip," McClintock said, "so really we know absolutely nothing about where it is acting, whether it's through the skin, the mucus membranes in the nose or the VNO." Nonetheless, practical uses could follow.

"The whole point would be to see what the compounds are and how do they act and what is their natural route and see whether we could develop a highly efficient ovarian modulator," McClintock said. A drug that constantly delays ovulation could serve as a contraceptive, while one that prompts ovulation might cure some kinds of infertility.

Linda Buck of Harvard University, who studies the molecular genetics of smell, said she has been unable to find functioning VNO genes in people. But some animals detect pheromones with their normal nasal cells, she said, and humans may too.

If pheromones have a big effect on human physiology, people may want to rethink their heavy use of soaps and perfumes: It may be, Buck speculated, that the constant washing away or covering up of these sweaty social signals account for some of the loneliness or depression in modern society. 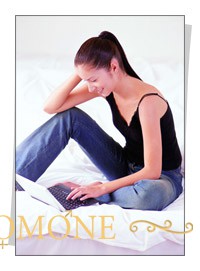